Will Artificial Intelligence Take Over the Recruiting Process? 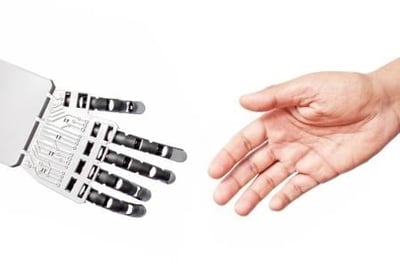 There is a major threat (and opportunity!) facing society as we know it. Robots, aka artificial intelligence aka AI, are coming to take our jobs and we're all doomed, right?

That's certainly one (extreme) side of the spectrum. Another perspective shared by one of the greatest technology and engineering pioneers, Elon Musk, warns us that artificial intelligence could be the best or the worst thing for humanity.

Musk isn't alone in his sentiment. There are a number of professionals who are fearful that AI will take over their jobs pushing them onto the unemployment line. Many of which include workers in the trade and service industries.

Which brings me to to think about AI's impact the field of recruiting. It wasn't that long ago when we reported on Mya, the recruitment chat bot launched in 2016. Mya was designed to decrease the time to hire and engage with candidates by using bots to assist with candidate communications. While chatbots facilitate what could be perceived as mundane conversation, it's enough to make even the most seasoned of recruiters on edge.

Understanding AI In The Recruiting Process

In a world that is becoming increasingly automated, will recruiters, who rely on human connections, be out of work? As this article from Connexys illustrates, the outlook is not limiting, but really limitless if you are able to make the distinction between AI and human behavior.

Identifying the Position or Need

The article points out that it all starts with a job posting; which is true. But you can make that argument that the seedling to the job posting is the conversation, "We need to hire someone." Whether that is an internal conversation within HR or the company and the recruiting agency, someone at some point needs to sign off on the decision to dedicate a resource to find candidates; often that resource being a dedicated recruiter.

Recruiters for the win!

Watch this webinar to learn how to use AI to shape your talent acquisition strategy.

What I am about to say might come as a bit of a shock, but computers are now writing blogs among various other pieces of content. When it comes to crafting the perfect job post, this might be a win for bots; more specifically Natural Language Generation (NLG) machines. To be clear, NLG acts more as a translator than it does as a creator. Meaning it can handle basic communications that do not require extensive grammar usage.

I'm no expert, but while NLG machines can't write a job posting however, I wonder between it and applicant tracking systems (ATS) whether machines could do a better job scanning the web to collect, compile and compare job posts. Considering the speed and accuracy factors compared to that of a recruiter, my guess would be the future is in the hands of the machines.

AI takes this round.

Finding the right candidate in today's digital landscape is both incredibility easy and ridiculously challenging. With some many channels to source candidates from social media, to personal networks and job postings, you have to be extremely calculated to be an effective recruiter. And for that reason, AI seems like the clear winner in the category of sourcing and vetting prospective candidates because it can process copious amounts of data while analyzing dozens of secondary sources of data.

Sorry recruiters, this goes to AI.

I'm not one to say never, but I am hard pressed to find a profession that would revert to pen and paper applications. The use of technology throughout the hiring and employment process works for a magnitude of reasons. But it will never replace the human interaction necessary to foster a positive and worthwhile employment experience. Think on-boarding or company culture, none of which would be possible without real live people, and most of which starts with the recruiter as the first touch point.

No recruiter, no hire!

I think the moral of the story is that recruiters need to step up their game and understand how and what marketing and automation tools can reduce the time to find that next great candidate. Artificial intelligence shouldn't be seen as a threat, but as a competitive advantage to enable the recruiter what they do best -- recruit!