PHILADELPHIA, PA – June 07, 2017 – Led by significant increases in perceived likelihood of a promotion and perceived likelihood of a raise, American workers’ confidence increased for the fifth consecutive quarter in Q1 2017, according to the national Worker Confidence Index™, a survey of U.S. workers from HRO Today Magazine and Yoh, the leading international talent and outsourcing company owned by Day & Zimmermann.

Overall, the index grew from 104.5 in the fourth quarter of 2016 to 107.6 in the first quarter of 2017. Despite perceived job security and trust in company leadership dipping slightly between the end of 2016 and beginning of 2017, perceived likelihood of a promotion and perceived likelihood of a raise grew dramatically, increasing by an average of 10.2 points. The Q1 2017 index marks the fifth consecutive quarter the Worker Confidence Index has increased, aligning with falling unemployment rates and the general health of the American economy. 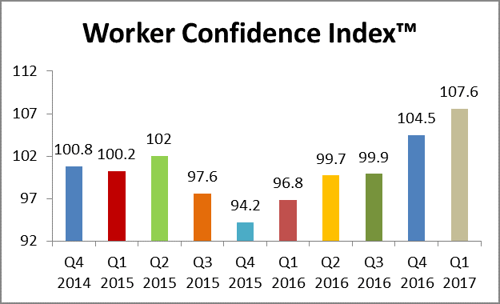 “It should be comforting for business leaders to see that their employees are feeling confident in the workplace. However, this sets up additional challenges for companies looking for talent during a time of relatively low unemployment. Happy, content workers are harder to recruit away from their current employer,” said Andy Roane, Vice President of Recruitment Process Outsourcing (RPO) for Yoh.

“It’s critical that companies, regardless of their size or health of the business, make employee well-being a priority. In order to retain and recruit the best employees in today’s competitive talent dynamic, they must take a proactive approach to crafting a work experience, start to finish, that’s tailored to the demands of today’s workers.”

Workers’ perceived job security fell more than five points between Q4 2016 and Q1 2017, going from 104.9 to 99.2. This is the lowest level of job security reported since Q4 2014. Those between the ages of 25 and 34 reported the highest levels of job insecurity, with 21.6 percent of young people feeling likely to lose their job in the next 12 months.

The largest quarter-after-quarter jump of any of the indicators, workers’ perceived likelihood of a promotion grew from 103.8 in Q4 2016 to 115.1 in Q1 2017. Again, men are more confident than women in their chances of receiving a promotion (27.6 percent versus 17.4 percent). College grads (30.9 percent) are almost twice as confident in receiving a raise as their non-college counterparts (17.5 percent).

Each month, HRO Today magazine employs ORC International's CARAVAN® Omnibus Surveys. Approximately 333 interviews are conducted online each month. Respondents are individuals age 18+ who are working full-time in the U.S. Quarterly reports are issued based on 1,000 responses per quarter. Respondents are asked a series of four questions. Each question uses a Likert-type scale where respondents rate each question on a 1-5 scale, with one being “Very poor” and 5 being “Very favorable.” The four questions asked are: Involuntary Job Loss Possibility, Likelihood of Promotion, Anticipation of a Raise of at least 3% and Trust in Company Leadership. To view the entire study, please visit, http://www.yoh.com/hro-today-employee-well-being-study.