Last night marked the first ever Red Nose televised event here in the US. With a thirty year history, this UK-based charity brought out some of the biggest names in movies, music and television to raise money for children and young people living in poverty. If you missed last night’s star-studded event on NBC, we’ve got the highlights. Plus, three simple ideas to boost employee engagement at your organization.

Host Seth Meyers kicked off the night and along with dozens of celebrities, keeping viewers entertained throughout the three hour event. Some of our favorite moments included a game of telephone, where celebrities like Reese Witherspoon, Neil Patrick Harris, and Zac Efron called each other to spread the word about Red Nose Day, but failed to grasp what they are actually promoting (aren’t we saving rosé wine?).

But the laughs didn’t stop there. With each skit delivered, a greater star appeared with an even grander entrance. From Gwyneth Paltrow zip lining over a red-nosed Mount Rushmore to Anna Kendrick captivating audiences as Indiana Jones, there were a few standout moments.

Leading up to Red Nose Day, we noticed a number of celebrity photographs and videos proudly donning the signature red nose. With a geographical dispersed employee base, Yoh and parent company Day & Zimmermann wanted to get in on the fun and good will. So, we did something a lot of company’s do. We asked our employees to help us raise awareness for Red Nose Day by submitting pictures of staff members in red noses, and if they felt inclined to, fundraise.

Truth be told, this was a last minute effort. We in marketing thought, if we get a few photos, great! But, we were floored by the overwhelming response. Many offices used go-to employee engagement ideas to generate interest among staff. While others, got creative.

Here are three simple ideas you can use to boost employee engagement at your organization, and have a little fun in the process.

Have a Photo Shoot

Sometimes all you need is a box full of props and a camera to engage with employees. Both our corporate office and Norfolk, VA location held a photo shoot to raise awareness for Red Nose Day. Participants stopped by during lunch to take a group or individual photo. Not only was this easy to execute, but it was great content for social media. Plus, the Norfolk office collectively rose over $100 for this cause. 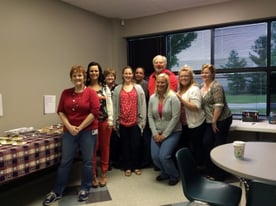 While red noses were hard to come by, that didn’t stop our Day & Zimmermann Lancaster office. To make up for the missing noses, employees held a bake sale and silent auction to raise money for Red Nose Day. Additionally, they did something so simple, it is genius! They allowed employees to wear jeans with a $5 donation.

Last but certainly not least, the Yoh St. Louis office pitched in to support the cause. They purchased their red noses from Walgreens, a partner organization of the Red Nose organization. The proceeds from their noses went directly to the cause, and everyone got a good laugh in the process.

Now it's your turn! Do you have tried-and-true methods you use to engage your employee base? If so, share them in the comments section of this blog.

Energy on the Rebound: Hiring Trends in the Energy Industry Read Post Diversity: For Employee Engagement Or As A Selfish Act Read Post The 3 Key Barriers to Hiring The Best Interim Executive (And How You Can Overcome Them) Read Post