AI Might Take Your Job, But There’s a Silver Lining 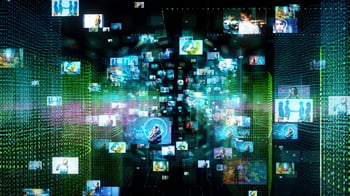 Saturday is my favorite day of the week. Of course, this does not make me unique. Humans in general love the weekend — both the last two days of the week and the Canadian R&B singer of the same name.

For me, it’s the lazy Saturday afternoons that make the weekend so precious. There’s nothing better than ordering takeout in your jammies and going through your timeline to see what’s riling up the internet this week.

So following the same routine, I logged on to my Twitter past Saturday to see which celebrity was being canceled. But instead, I came across an article from the Washington Post that hit too close to home. It was about an algorithm that had unlocked the ability to use and comprehend language as well as human beings.

The GPT-3 machine learning model has demonstrated the ability to write articles, short stories and memos just like us human beings. As someone who makes a living stringing together alphabets, this made me anxious.

All of a sudden, my lazy Saturday was ruined, and I was asking myself some grim questions:

Am I about to lose my only source of income?

Who is going to pay me to write anything if an algorithm does it better and at a lesser cost?

Is AI taking my job?

Most of my published work has been about emerging technologies. Just recently, I wrote about the applications of AI in the fashion industry. Nothing gets me going like technological advancement that promises to reshape industries and change human life for the better.

So it’s kind of ironic that, of all people, I would be picturing myself in the unemployment line due to a breakthrough in technology.

My initial mini-panic on the GPT-3 model might say less about the technology itself and more about the perception most of us have developed of Artificial Intelligence over time.

Decades of fear-mongering around algorithms and the “human vs. AI” narrative has led us to perceive new discoveries as unwelcome news. Even self-proclaimed techies like myself are vulnerable to such paranoia.

To understand where this fear comes from, one needs to proverbially hop into a DeLorean and go back in time.

Why We Fear AI: A Historical Perspective

Back in the day, when workplaces were bringing in IBM computers for the first time. There was similar hysteria among the workers. Adrienne Larfrance has documented the fear of computers in the early 1980s for the Atlantic.

The fear of computers got to the point where IBM itself was releasing adverts telling employees they don’t need to fear the squared shaped devices in their offices.

Around this time, a new genre of fiction emerged where robots took control of civilization. William Gibson’s 1984 novel Necromancer was one of the many novels that depicted a scenario of technology going rogue. In the same year, The Terminator hit the big screen.

But the changing technology didn’t create a dystopia. In contrast, it led humanity to new heights.

Technology is the Ultimate Job Creator

When everyone was calling doom and gloom, computers were generating more jobs than they were displacing. A few years ago, economists at a UK consultancy Deloitte analyzed census data for England and Wales going all the way back to 1871.

They concluded that while technology reduced employment in agriculture and manufacturing, this was offset by unprecedented growth in the creative, caring, business services and technology sector.

For instance, 6.6% of the workforce in England and Wales were associated with agriculture in 1871. Today this has fallen to 0.2%. Not only did advancing technology create new forms of employment, the lower cost of productions enabled companies to sell at low prices, empowering customers to spend their money in discretionary goods and services such as entertainment and gyms. Inevitably, this created more job opportunities.

In simple words, technology freed humans from tedious and repetitive tasks allowing them to spend their energy in creative tasks. Artificial Intelligence promises to do the same but on a whole new level.

Man and Machine Need One Another

“Technology creates its own sets of tasks which require the human workforce. Most of the jobs we have today did not even exist two decades ago,” says Alex Reynolds of Namobot, a business name generator that utilizes AI and big data.

This holds true if we take a look at the modern video gaming industry. Back in the day, the gaming industry consisted of small studios that barely had 30-40 individuals. Now, corporations invest millions of dollars into projects that involve voice actors, designers, story writers, sound engineers and programmers.

We are on the brink of something similar with Artificial Intelligence. As this technology expands, there will be a significant need for training for data and maintenance.

Sure, algorithms might know how to advertise to a certain demographic, but it will never know the racial and religious sensitivities of this group. This is where humans will come in.

Brace Yourself for AI Jobs

Byron Reese, the CEO of GigaOM Media,  believes “AI will be the greatest job engine the world has ever seen.”

In his article for the SingularityHub, Byron gives an example of Automatic Teller Machines (ATM), explaining that according to conventional wisdom, these machines should have eliminated the need for human tellers. However, there are more tellers now than there were before ATMs surfaced around the urban centers.

This happened because the cost of baking was decreased by ATM, which led to more banks and, of course, more tellers.

Reese’s assertion is backed by the World Economic Forum’s (WEF), which estimates that AI will eliminate 75 million jobs by 2022 but create more than 133 million in the same period. This means algorithms will create nearly twice the jobs they will displace.

Preparing for the Future

AI will disrupt the world, just like all revolutionary technologies before it. Whenever science takes a step, the world moves forward, and unfortunately, some people are left behind. Change is inevitable, and despairing does no good.

Humans need to do what we have done for ages, and that is to adapt. Both workers and companies need to plan ahead. Employers need to strategize the application of AI in a way that workers aren’t adversely affected.

Meanwhile, if one’s job is vulnerable to automation, they should seek to invest in themselves and polish their creative side. Experts believe soft skills such as verbal communication might become extremely important in the coming age.

Who knows, maybe an AI would be writing articles like this in the near future. But as long as humans hold on to our creativity and everything that makes us unique, there will always be space for my words on the net.

About the Author: Evelyn Johnson is a wordsmith who's interested in technology and digital world. She occasionally delves into emerging technologies and smart spending as well. She dedicates her spare time to her cat and Netflix.

There’s always hope: The fall TV season is here! Read Post CWS is October 19th – Why You Must Be There Read Post There’s No Luck in Recruiting; Even On St. Patty's Day Read Post