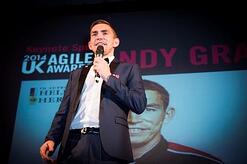 LONDON—24 November 2014—Yoh, a leading provider of workforce solutions, announced the winners of its fifth annual UK Agile Awards event, held on 20 November 2014 at The Bloomsbury Ballroom in Central London. The Agile methodology has been revolutionizing project management for more than a decade and this highly anticipated event attracted industry leaders and top Agile practitioners from across the region to honor those who best represent this progressive discipline. The gathering resulted in the single largest Agile industry event of its kind in the UK, and all proceeds from this black-tie affair benefited UK charities.

Celebrating its fifth year in 2014, the UK Agile Awards were created to recognise and award top Agile talent in this growing project-management discipline. This year, the awards were open to practitioners and senior leaders in the UK who exemplify conviction, passion, and courage in driving the adoption and broad deployment of the methodology. The winners were recognised as catalysts for successful innovation and use of this discipline.

The 2014 UK Agile Award Winners include:

BEST USE OF AGILE IN THE PUBLIC SECTOR
James Findlay
HS2

This year’s programme also included several headline speakers from across the globe who shared their expertise and talents with the attendees. Notable guests included: 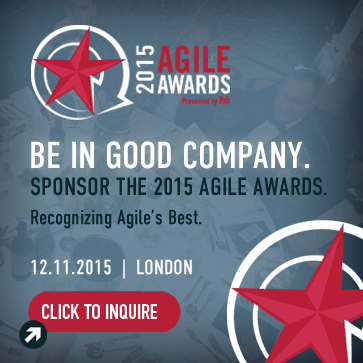