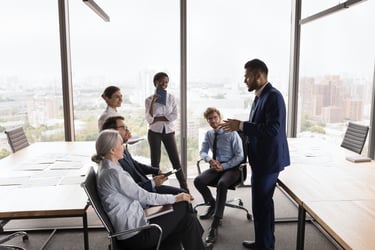 Philadelphia, PA (January 11, 2023) – Talk of the U.S. economy experiencing a recession in 2023 is continuing, as some indicators – including rising interest rates and inflation – hint at a potential downturn. In response, employees may be making efforts now to protect themselves against future economic volatility, according to a new survey from Yoh, a leading international talent and outsourcing company and part of Day & Zimmermann.

Most strikingly, with a probable recession on the horizon, nearly 3 in 10 employed Americans (29%) are more likely to seek work outside of their existing job (e.g., via a second job or side hustle) to supplement their current income. The survey was conducted online by The Harris Poll on behalf of Yoh among 1,097 Americans ages 18+ who are employed full- or part-time.

In total, 88% of employed Americans selected at least one of the following statements concerning their careers as talks of a potential economic recession continue:

While data from the Yoh survey reveals measures employees may be taking to ensure their job security, especially in the event their employer initiates layoffs or furloughs, the results also signal employees’ willingness to engage in riskier behaviors despite the current economic climate. Survey findings show that with talk of a potential economic recession on the horizon:

A Note to Employers

As the survey results also uncover, there are limits to the sacrifices employees are willing to make given the current economic situation, which employers should take note of. In particular, the findings show:

“The results of our latest survey paint a nuanced picture when it comes to employees’ current outlook on our nation’s economy,” said Emmett McGrath, President, Yoh. “While employees appear willing to demonstrate increased loyalty and a renewed commitment to their employer in these uncertain times, organizations that take advantage of this goodwill do so at their own peril. As the findings illustrate, the current economic situation does not absolve employers of their ongoing responsibility to treat and compensate their employees fairly and consistently. Employee sentiments may change in the weeks and months ahead – particularly if the economy takes a rapid nosedive – leading some to become more agreeable to dramatic changes in their work arrangements, responsibilities and compensation packages. Until then, employers would be wise to continue outwardly expressing appreciation for their talent, especially because a sizeable percentage of employees are willing to at least consider leaving their current employer, even amid impending economic turbulence.”

Additional findings from this survey of employed Americans include

SURVEY METHODOLOGY
This survey was conducted online within the United States by The Harris Poll on behalf of Yoh from November 17-21, 2022, among 2,074 U.S. adults ages 18+, of whom 1,097 are employed full- or part-time. The sampling precision of Harris online polls is measured by using a Bayesian credible interval. For this study, the sample data is accurate to within +/- 2.8 percentage points using a 95% confidence level. For complete survey methodology, including weighting variables and subgroup sample sizes, please contact Nick Puleo at Nick@gobraithwaite.com.